When the world’s busiest conductor, Maestro Valery Gergiev, heard that there is a soprano who works on five continents, as does he, he exclaimed with thus supreme authority that “she is the only one”. That classically-trained singer is Sivan Rotem, an Argentinian-born Israeli whose burgeoning career in opera, concerts, recitals, radio, television, cabaret, commercial recordings and master classes has taken her across the Americas via the West Indies and many continental European countries to Egypt, South Africa, China and Australia.

Described by the Salt Lake Tribune following her Brahms Requiem with the Utah Symphony as “a classy vocal talent” with “an angelic soprano voice”, Sivan Rotem is considered one of the most outstanding singers of Israel. Born in Buenos Aires, she started her musical training as a violinist. Graduating from Haifa University in English and Literature and the Rubin Academy of Music at Tel Aviv University in Singing, she continued her vocal studies in the USA with Ellen Faull.

She made her debut with Zubin Mehta and the Israel Philharmonic Orchestra, and appears regularly with all the leading orchestras of Israel. She also sang many leading roles with the Israeli Opera and in Germany, Finland and the USA.

Her flamenco quartet Classic Flamenco was invited to Madrid where it sold out at the Suma Flamenco Festival, subsequently appearing in England at the Henley Festival and in London to great acclaim.

The recital will also be given in London the previous evening, Wednesday 1 March.

Today I have been invited to a recital at Raynham Hall. I have not been there before, nor really been aware of the Hall as a concert venue but it seems that the owners of the hall, Lord and Lady Townshend are keen to use their stately home to help raise money to repair some of their works of art which are in desperate need of restoration. In particular, they are trying to raise the fund of £48,000 to restore three invaluable 17th century paintings of the children of King Charles I.

They have spent the last 5 years restoring the fine art works and decor of the hall which has been in the Townshend family since 1620. Sir Roger Townshend started the building and then in the 1720s, the 2nd Viscount Townshend commissioned William Kent  who later went on to design both Holkham and Houghton Halls which are nearby – and well-recognised as treasures of Norfolk.

Kent’s design work was ornate and included elaborate carvings and mosaics, decorated doorways and lanterns most of which are intact today.

Tonight’s concert will be held in the Marble Hall of Raynham which apparently has astonishing acoustics. It is part of a series of concerts to bring world-class musicians to perform in the house so that people can experience the atmosphere created by the works which the money will help to maintain.

I am looking forward to hearing acclaimed violinist Rachel Podger who is a leading musician in the Baroque and Classical style and Maggie Cole who is also internationally acclaimed for her virtuosity on piano, fortepiano and harpsichord.

I think this will be a rare opportunity to recreate the atmosphere of an 18th century drawing room, and will possibly signal the emergence of Raynham as a distinctive concert venue – I will report back!

The Saturday recital is nearly always the mega-star concert and September 17th is no exception as Rachel Podger is, as many of you know, a violinist of world class who performed JS Bach here 18 months ago with Maggie Cole in their first recital together. Maggie, famed not least for her recording of the Goldberg Variations, is a regular at Raynham and we are thrilled to have her here again with Rachel.

A Happy New Year to all and welcome to our first John Innes concerts in 2016. We start with a weekend of music devised by the brilliant young Belgian cellist David Cohen, who has assembled an impressive team of fellow musicians from Canada, Russia and the UK. Of particular interest is the final Sunday afternoon concert featuring the  Michael Nyman Quartet written especially for the Smith Quartet. David Higgins, who has been commissioned to write a especially for this concert, is one of the most exciting and innovative young composers  who has already notched up compositions for BBC Proms. Gordon Crosse’s new cello sonata also written for David Cohen, will get two performances (15th & 17th)– two world premieres in a weekend cannot be bad!  The weekend finishes with  Schubert’s glorious string quintet, which many consider to be amongst the finest pieces of chamber music ever written. Hope to see you sometime over the weekend. Roger

P.S. Both the Ibragimova concerts on 8th & 22nd January are fully reserved  so please don’t come along unless you are on the list! All other chapel concerts are fine for space just turn up and pay n the door!

Schnittke: Suite in the Old Style

Nyman: String Quartet No.5 “Let’s not make a song and dance out of this” 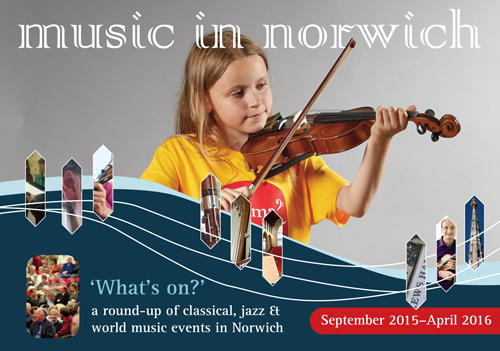 Click on the link below the image to download a pdf version (approx 4 MB) of the Music in Norwich calendar with concerts from April to September (and a bit beyond). Please feel free to distribute it to your networks. Hard copies will be available from Tourist Information Centre, Prelude Records, St Andrew’s Hall, Norwich Cathedral and many other venues in Norwich and surrounding area

From Venice to Hamburg

‘Seventeenth-century Jazz’
Italian and German music in the ‘Stylus Phantasticus’
works by Schmelzer, Marini, Froberger and others

A summer concert of instrumental music presents a fascinating programme exploring seventeenth-century links between Italy and Germany, in the exuberant style known as Stylus Phantasticus.

Many of the composers are not well known, but it is wonderfully imaginative music and you know by now the Bach Players’ knack of putting together marvellous programmes of top quality lesser known works. Nothing dusty or straight-laced here!

It is also a chance to discover the exciting sounds of the cornetto, sackbut and dulcian. The concert has been entitled ‘seventeenth-century jazz’ because in the course of the tutti pieces each instrument also has a virtuosic solo demonstrating the skill of the player and the special sound of the instrument.

Do not miss this uplifting concert, warm sounds and catchy rhythms uniting to create a perfect summer entertainment, with drinks in the Octagon garden at the interval.

and on the door

The Academy of St Thomas was founded in 1973 and has been promoting high calibre concerts in the region ever since. The players of the Academy are drawn from professional musicians and peripatetic teachers who donate their talents in order to play in a high-standard orchestra. Concerts have been acclaimed for their high professional standards and exhilarating performances under the direction of conductor Christopher Adey.

A gathering of musician educators who are working with young people and interested in sharing and developing their skills.

CME invites musician educators who work with young people to a series of free training/networking/sharing events taking place on Wednesdays 6-9pm at The Birdcage in Norwich from January to March 2014. Participants can attend all 6 events, or drop into the ones most relevant to their interests/needs.

Each of these informal and focused sessions will be a blend of discussion, guest presentations and practical activity on a particular theme, followed by action planning. Music will be at the heart of activity and there will usually be some form of live performance – an opportunity for a young band showcase, an experiment or other activity related to the main theme. The last hour of the event will be an opportunity to network and socialise.

Sessions will be hosted by CME and chaired by MARK HOWE, Freelance Community Music Practitioner, who has worked with CME for many years, specialising in band skills, engagement, tutor training and junk instrumentation. It is hoped that this series of sessions will inform the wider dialogue about community and voluntary sector arts based practice (this is what goes on here and why)!

Sessions are free, but please book your place in advance at http://www.cme.org.uk/booking-form/ (select State of Play). Once we have your details we will contact you to find out which sessions you wish to attend.

These sessions are funded by the National Foundation for Youth Music. 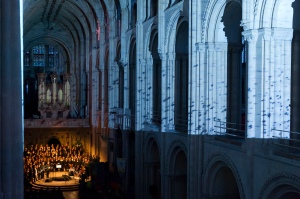 Norfolk’s internationally renowned Voice Project Choir will be joined by the solo voices of Human Music and percussionist Derek Scurll for two brilliantly atmospheric Christmas concerts with a difference in the beautiful Presbytery of Norwich Cathedral on Saturday 14 December at 7pm and 9pm.

The music, specially written by Jonathan Baker set to words by Norfolk poet Andrew McDonnell, will celebrate the season with themes of music, metaphysics, spirituality and the supernatural – haunting music that will evoke the ghosts of Christmas’ past present and future. Voice Project Choir concerts always provide visual as well as musical spectacle and this will be no exception. Tim Tracey, who so skilfully lit Ideas of Flight at this year’s Norfolk & Norwich Festival, will spectacularly illuminate the Cathedral with imaginative lighting and visuals

The 100-voice choir, is co-led by conductor Sian Croose and composer Jonathan Baker. It is completely open access and the singers have been has been rehearsing since early October for the concert. Past Voice Project compositions have gone on to be performed on BBC Radio 3 and at international jazz festivals in Coutances, France, Sage Gateshead and the London Jazz Festival.

We are into a new month and there are lots of concerts leading up to Christmas. For a full list download the pdf or have a look at the at a glance list here. You can also find out more details on the individual music organisation websites by following links here

If you have any questions please email info@theshiftnorwich.org.uk