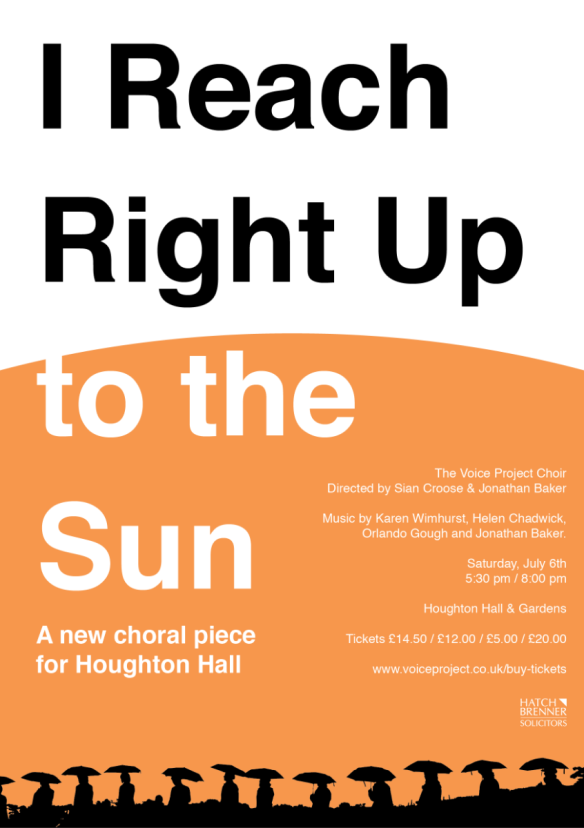 I thought you may be interested to know about a unique choral performance that is happening in the grounds of Houghton Hall on Saturday, 6th of July.

Award-winning Norwich based choir ‘The Voice Project‘ present their summer concert, titled ‘I Reach Right Up to the Sun‘ and if it’s anything like previous Voice Project pieces it will be a unique and beautiful experience.

The 100+ singers of the choir will be leading the audience in and around the stunning gardens and grounds of Houghton Hall, performing specially composed contemporary choral music in a number of beautiful locations around the site.

There is also a Henry Moore sculpture exhibition on show at Houghton at the moment and these pieces and the landscape they currently sit in have inspired the music and the staging of the show. If you’ve seen a Voice Project performance before then you’ll know it will be well worth making the trip out to catch it.

There are two performances, a 5:30 pm and an 8:00 pm – I think the first show is close to selling out, if it hasn’t already, but there are still a few tickets available for the 8:00 pm ‘twilight’ performance.

If you are interested, you can find more information and purchase tickets from www.voiceproject.co.uk/buy-tickets

Norwich Synagogue is proud to announce a special concert on

In the 21 yrs since Shir was born, they have provided quality Jewish music for countless Weddings, Bar / Bat mitzvahs, Birthday parties, Wedding Anniversaries,  as well as concerts, charity events, fundraisers and synagogue events.  You will find this will be a complete foot tapping experience, if you don’t get up and dance that is!

Please get your tickets as soon as possible as space is limited. 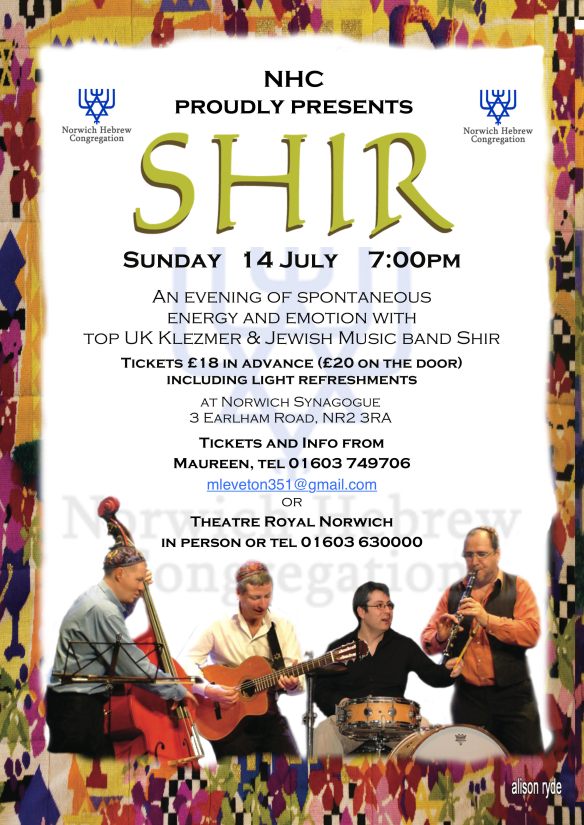 Tickets on the door

Well known to AST audiences, Philip Dukes returns to perform two lovely baroque viola concertos and direct the rest of a programme ideally suited to the ambience and acoustics of this wonderful Norfolk Church.

Do bring a picnic to enjoy by the cricket green before the concert.

Tickets for all concerts available in person or by phone from St George’s Music Shop, 01603 626414 and online from www.ticketsource.co.uk/ast
Follow us on Twitter @ASTNorwich
Sponsored by Hilary & Lewis Jarrett

The culmination of the Norfolk Schools’ Opera Project sees the world premiere of a brand new children’s version of Mozart’s The Magic Flute performed by over 100 children from Norfolk schools and accompanied by an orchestra of gifted and talented young musicians.

Norfolk Music Hub and Norwich Theatre Royal are working in partnership to support this year-long creative and cultural learning programme in schools through the medium of opera.

Organ recital by the organist at St Peter Mancroft

A performance of the Eroica Symphony is always special, but teamed with the less frequently heard Bassoon concerto by Weber and Schubert’s 5th Symphony, said to have been written during a period of particular infatuation with Mozart’s music, our summer concert offers a treat for the ears. 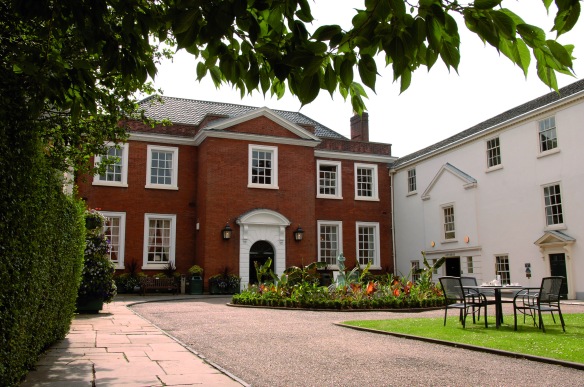 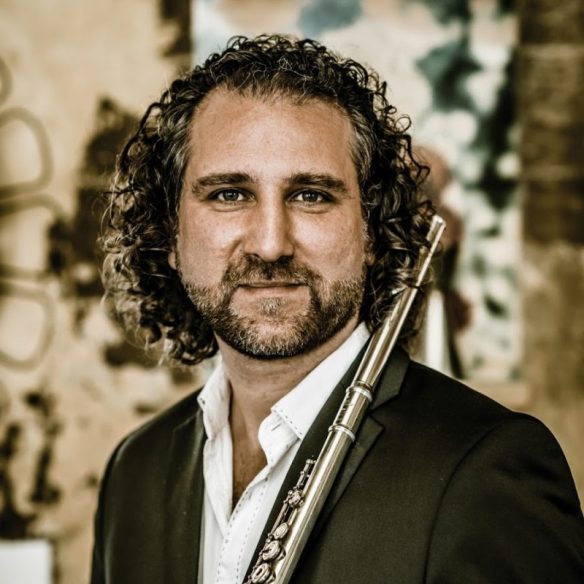 Next in the series of concerts for the Sistema Performance Project, this time with the Venezuelan composer and flautist Efrain Oscher and Sistema musical director Juan Gabriel Rojas. The performers are the Teen Sistema orchestra who have been learning for nearly ten years and are now accomplished musicians.

If you have never heard of Sistema then you might want a bit of background.

Sistema started in Norwich ten years ago. You may have heard them in the early days when they had just been given instruments – one of the key features of the programme is that children start to play in the orchestra, and in public, right from the very beginning. This meant that some of the early concerts were quite tough listening! However, now with three orchestras of different levels of age and accomplishment, the smaller teen orchestra has been performing on a regular basis, schooled by Juan Gabriel and they no longer sound like school-children. If you have not attended a Sistema concert recently I think you will be very pleasantly surprised at the quality and range of the music.

Originally called In Harmony, the programme was funded by the Government for three years, basing the programme on the very successful El Sistema project in Venezuela which resulted in the Simon Bolivar Symphony Orchestra led by the charismatic Gustavo Dudamel which many people have heard of as they now tour the world.

When Sistema started in Norwich it was in three primary schools in Mile Cross, Larkman and Catton Grove and the whole school played. Now the programme has spread to other schools in the city, concentrating on areas where most children would not otherwise have the opportunity to play. It is a social impact music programme which aims to enable and inspire children through participation in music. It is no longer funded by the government but depends on a range of sources ranging from school budgets, public funding via the Norfolk Music Hub and Arts Council, trusts and funds such as the Freeman’s Charity, Norfolk & Norwich Chamber Music Club and Chivers Trust and business sponsors such as Art Angels, The Rees Consultancy and Culture Shift. It also depends on donations and volunteer support.

If you can help in any way, as a sponsor, volunteer or have an instrument to donate, or money – all help is welcome for this valuable project which depends on help to keep going, providing free music and instruments to children who would otherwise miss out.

Next in the series of concerts for the Sistema Performance Project

Sistema in Norwich is a programme that uses the experience of joyful, collective music-making to build resilience and raise aspiration among children and young people from some of Norwich’s poorest estates.

About Sistema Performance Project
The Sistema Performance Project will develop a series of concerts over the coming year with the Colegate Nucleo Orchestra, creating more opportunities for public performance and enabling our young people to work with a range of professional musicians and ensembles with different styles.  The project has created an exciting and engaging concert programme to show the progress of our young players, support the development of the Sistema in Norwich programme and extend the impact of our work with young people, including developing leadership.

Discover more about the political and social history of the influential Townshend family during an exclusive 17-room tour of Raynham Hall including the Marble Hall, the King’s Bedroom, designed for the visit of King Charles II, and the Belisarius Room.

The tours, led by Lord and Lady Townshend, are peppered with their personal anecdotes and the stories about this glorious stately home and its residents.

The next Raynham Recital will be in September – details below

Saturday 7th at 6.30pm: Rachel Podger has played both baroque and classical violin at Raynham and is returning with her regular harpsichord accompanist Marcin Światkiewicz, a newcomer to Raynham. Their programme includes music of the late C16th to very early C18th: Fontana, Leonarda, Corelli, JS Bach, Veracini & Frescobaldi. 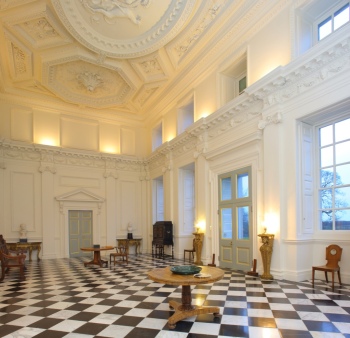 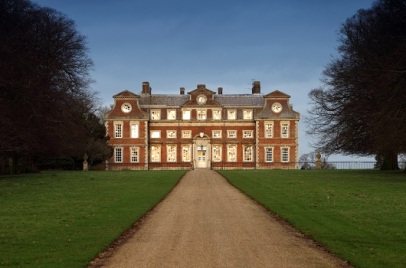 Raynham Hall near Fakenham, Norfolk has been the seat of the Townshend family for over 400 years. Raynham Recitals is a programme of chamber music held in what used to be the great hall of this Jacobean house designed and built by Sir Roger Townshend with his Master Mason William Edge. Later paved in marble by William Kent and embellished in C18th style, the Marble Hall epitomises the dual spirit of Raynham Hall. Lofty, elegant and flooded with light, it also has a clear but gentle resonance which is perfect for the intimate chamber music presented at the Raynham Recitals.

Many of you will be familiar with the TV programme ‘Only Connect’. Well, here we have an evening of music which all connects in some way. It centres around Corelli’s joyful Op. 6 no. 2 which is the inspiration for this year’s winning composition from the Losh-Atkinson Historic Sounds Composition competition.

Handel also wrote an Op.6 for strings, so we will include his Op.6 no.2 as well… you get the idea.

Some of the connections will be obvious, some more tenuous, but included in the programme are Telemann’s Frog concerto and his Don Quixote suite, Rebel’s Characters of the dance and a harpsichord concerto by the rarely played José António Carlos de Seixas.

Music in Norwich
Create a free website or blog at WordPress.com.